Across the land of midnight sun: Scandinavian Trip 2012 - Voss, Norway(1)

I still remember it was early summer in the year 2012 when I set out for the legendary land of midnight sun in the Northern periphery of European continent, a land called Scandinavia. Before the trip I only have a few vague impression (or stereotype) of the Nordic world: harsh weather (long hours of daylight during summer and long hours of darkness during winter, plus long, very harsh winter), egalitarian society that base not on the class struggle but on a modern, the Scandinavian Model that combines technologically sophisticated economy and a comprehensive welfare system, very high living standard that tops almost all standards of measurement (per capita GDP/GNI, HDI, life expectancy), a society of happiness and peace which paradoxically has very high suicide rate (just below East Asia), inventor of a fashion trend that emphasize simplicity, not to mention breathtaking natural scenery and hundreds of miles of unspoiled green forests...

But what is the real Scandinavia? How much of my prior knowledge of the Nordic world is based on fact, and how many of them are just my imagination, stemming from misunderstanding and misinformation? I decided to find them out myself. Of course, I didn't expect to accomplish comprehensive understanding of the Nordic world in a relatively short, 14-days trip, but at least it can help me to partially clear the things up.

At first glance, it seems rather strange that I, a Hellenophile and enthusiast of Greco-Roman civilization would be interested in Scandinavia, for it lies in the far northern corner of Europe, far from the great civilizations that flourished around the Mediterranean. Historically speaking, relatively little is known for sure about the antiquity of Scandinavia. What we do know is that it was inhabited by German tribes (a very broad classification used by the Romans) called the Suiones (Swedes?) according to the Roman historian Tacitus in late 1st century. Contact between Scandinavia and the Mediterranean World might have begun as early as when Phoenicians and Greeks flourished, and there are several references to a mysterious land Thule lying north of Britain in Strabo, Pliny and Ptolemy's writings. The most famous Roman artifact excavated in Scandinavia is undoubtedly the 4th century Nydam Swords discovered in Denmark, among them are some of the best preserved and finest examples of Roman Spatha or long sword ever discovered. Metallurgical analysis had shown that the Nydam Swords were high carbon steel treated with quench procedure, one blade was well hardened to hardness values reaching 937HV (Vickers hardness scale).

During Medieval Period, Scandinavia was best known as the homeland of fierce warriors of the Vikings, the notoriously fierce warriors that swept through Europe, striking fear in wherever they had left their footprints. On another hand Scandinavians are also famous in the Byzantine Empire (Eastern Roman Empire), where they were recruited by the Eastern Emperor as elite mercenaries and personal guards of the Emperor known as Varangians. 9th century Runic graffiti found in Hagia Sophia in Constantinople stand as testimony to this chapter of Scandinavian history. I can go on and on with history and the issue of Scandinavia-Mediterranean contact, but I'd rather decide to stop here, as learning about history is only part of it. My main purpose of the trip remains to be natural scenery appreciation and experiencing the much-praised contemporary Nordic world (inc. Norway, Sweden and Finland, I visited Denmark in 2011). I'm going to share my travel experience as well as providing tips I found useful for those who're planning to travel to Scandinavia. I'll begin with my arrival at Oslo, and the subsequent travel to a small town called Voss by train. Stay tuned if you're interested.

The Bergen Railway has frequently been referred to as the most beautiful scenic railway in the world. I had been skeptical of this claim since it's difficult if not impossible to come up with a fair, objective standard that measure scenery. However subjectively speaking, the Bergen Railway experience never failed my expectations. Please be noted that there's no high speed rail lines in Norway, nothing like TGV or ICE in mainland Europe, the 400km trip from Oslo Central Station to the Fjord town of Voss takes approximately five and a half hour. Norway has always been famous (or notorious) for having the highest cost of living in the world. Everything there seemed to be ultra-expensive, but not the train ride if you choose the right ticket. I booked the train ticket from NSB (Norwegian Rail Company) website in advance, and there's a choice called minipris (special fare) when you select your train ticket type. In contrast with the standard fare of 747NOK (around a hundred dollars, NOK is official Norwegian currency, Euro is NOT generally accepted in Norway, which is NOT a member of EU), minipris ticket only costs 249-299NOK a trip. So please book in advance and take advantage of the significantly reduced price offered by NSB. The downside of this is minipris ticket is neither flexible nor refundable, this should not be a problem if you've planned your itinerary in advance.

After leaving the Oslo airport I immediately proceeded to the NSB ticket office to collect the ticket I've booked. On the platform I was greeted by a group of Norwegian (drunk) youngsters who asked me to take a photo of them. They asked where I and my friend was going, and I answered "Voss". They were taken by surprise, "what? Voss?", and I reassured them I was indeed travelling to the small town of Voss to visit the fjords. They finally recognized that I and my friend were actually going into the mountains. They told me they were travelling to Bergen (so, we were actually going in the same direction) by plane.

I waved farewell to those guys and boarded the train to Oslo with my friend, we barely managed to catch the connecting train to Voss heading toward Bergen direction at Oslo central station. I settled in for the long journey across vast uninhabited forests and towering Scandinavian mountain range that made up the North-South mountainous spine of Norway. After the train left the suburbs of Oslo, what I could see was endless dark green boreal forests, mirror-flat lakes and running streams coming from high up the mountains. 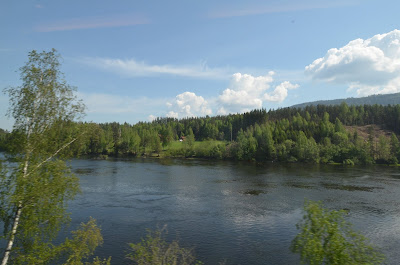 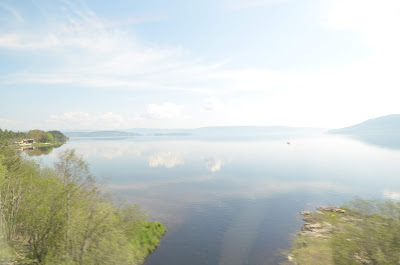 Mirror-like reflection of a lake

The train gradually ascended toward the mountains when snow covered landscape appeared outside the window. Remember to sit on the left side as the view is most spectacular on the left side of the train (right side if heading toward Oslo). Mountain valleys of late May was still covered with melting ice and snow, forming numerous ponds that appeared pale blue under the crystal-clear Nordic blue sky. Ice water eventually drained into fast-flowing mountain streams. Since the latitude was too north, snow melted relatively late even on mountains not considered to be tall (Finse the highest point of the rail line has an altitude of 1,222m). 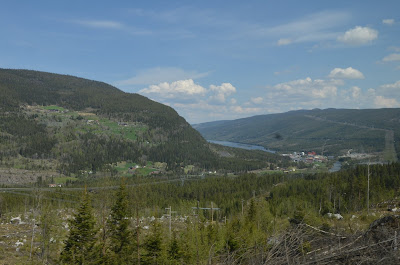 The train making an ascend toward the mountains 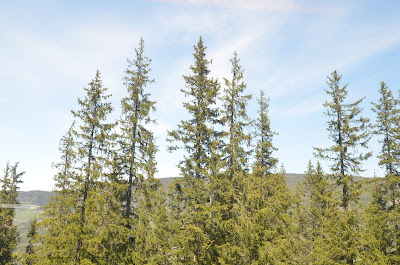 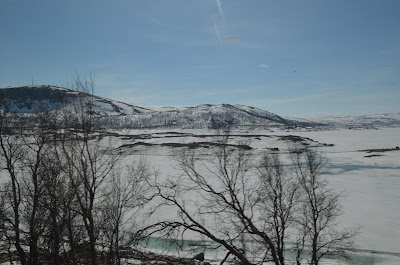 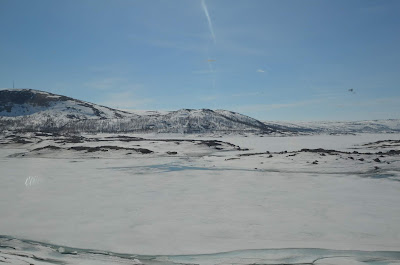 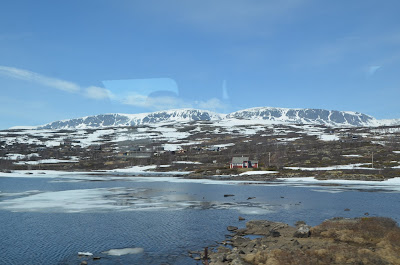 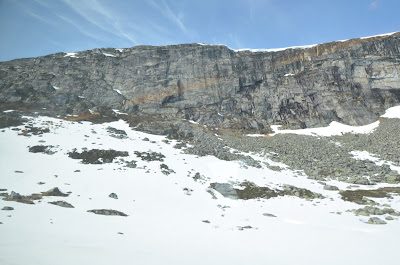 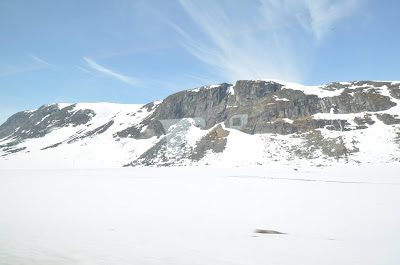 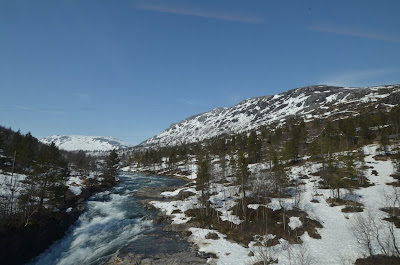 Forest sprang to life when snow gradually melted away

Overall, it's the most enjoyable train ride that impressed me to these days. if you have a chance to visit Norway, do not forget to give it a try. Eventually I arrived at Voss railway station at around 5, 6pm and checked in the hotel. In late May this part of the world has extraordinarily long daylight and this gave me plenty of time to explore the small, peaceful fjord town. 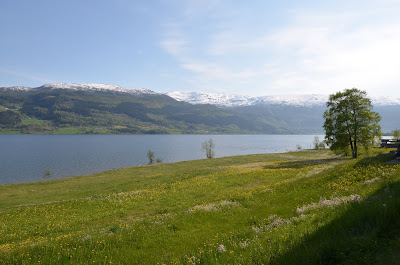 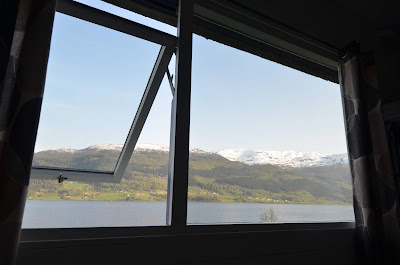 Superb view of the hotel room

My first e-book on Amazon Kindle 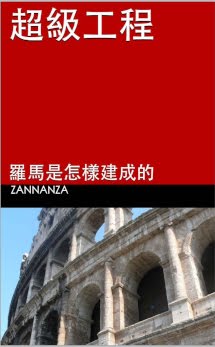 Super engineering: How Rome was built 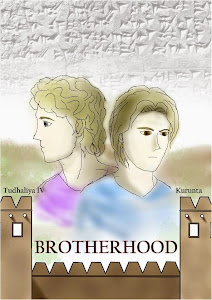 An epic story of brotherhood and betrayal